A Crow as a Beauty Mark? 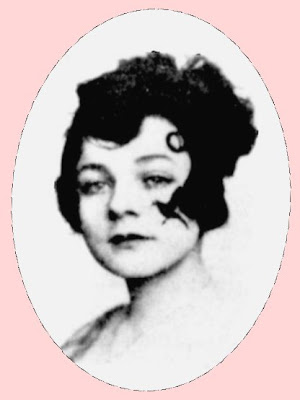 Muriel Window circa 1913-14
From The San Antonio Light, 29 Nov 1914:
Muriel Window of "The Passing Show [of 1914]", claims to be the originator of the silhouette beauty spot fad. It is Miss Window's habit to wear her favorite bird or animal, regardless of size, on her cheek. One of Miss Window's favorites is a crow in repose, the purpose being, evidently, to keep crow's feet away from her beautiful eyes. She occasionally wears a faun on her cheek, the said faun striving modestly to leap over a mole.

The Other Tony from Joisy 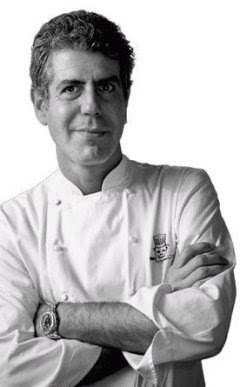 Can a girl O.D. from binge-watching a long tall drink of water named Tony Bourdain travel the world?

Thanks to a Netflix membership and dozens of episodes of Anthony Bourdain: No Reservations

Yes, I know the wildly popular Travel Channel program first aired in 2005, but I dumped cable in 2004, so I've only just found this modern-day Jack Kerouac

A blessing in disguise, I'd say.

Instead of having to wait a week between shows and then go cold turkey at the end of each season, I can follow my new heartthrob from country to country with no interruptions save bathroom breaks and the occasional meal.

"Occasional" because a good part of each show has Tony chowing down on whatever the locals eat. Since he believes it'd be an insult to his host to refuse any dish set before him, "if you're offered puppy heads, you eat puppy heads".

I haven't come across that particular episode yet, but seeing him consume similar Third World "delicacies" did ruin my appetite on more than one occasion.

That said, other than having an iron stomach, the constitution of a 20-year-old, and an insatiable curiosity about cultures different from his own, Tony Bourdain is just a down-to-earth "regular guy" from New Jersey who for 28 years was the head chef of several New York City restaurants.

The 15- and 16-hour shifts ended after his witty expose of the culinary world called Kitchen Confidential: Adventures in the Culinary Underbelly

became an immediate best-seller and led to his first food-travel show on the Food Network, which in turn led to a much better deal at the Travel Channel in 2005.

, No Reservations: Around the World on an Empty Stomach

, and his latest (the sequel to Kitchen Confidential), Medium Raw: A Bloody Valentine to the World of Food and the People Who Cook

"Cooking professionally was work, but writing isn't", he told an interviewer, and admitted to feeling somewhat guilty that it isn't.

He'll lambaste the show's producer onscreen for picking less-than-ideal locations, but in reality Tony and the crew brainstorm where to go and when, then it's up to the producer to make it happen. 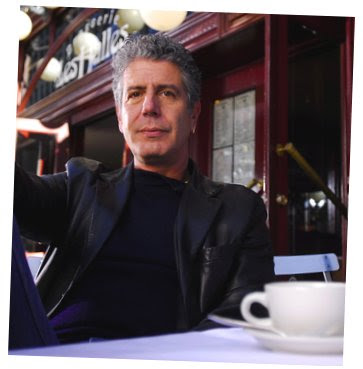 Photo credit: Travel Channel
In 2007, Tony became hands down the sexiest 50-year-old first-time dad on the planet. One who has no problem keeping up with a 3-yr-old when he isn't off in some exotic location filming NR, or promoting a book or the show, trips that keep him on the road for ten months a year.

In July 2006, Israel invaded Lebanon the day after Tony and crew arrived in Beirut, forcing them to take refuge in the Royal Hotel on a hill miles from, but within sight and hearing of, the non-stop bombing across town in South Beirut.

It would be weeks before U.S. Marines from the aircraft carrier USS Nashville would evacuate them. With nothing in the can but a meal in one restaurant the day they arrived and no possibility of leaving the hotel for more, Tony had the bright idea to film the war from their vantage point high above the city, along with interviews of other stranded guests, and eventually their own evacuation. And so they did, footage that became an NR special episode

which received an Emmy Nomination in 2007 for Outstanding Informational Programming. 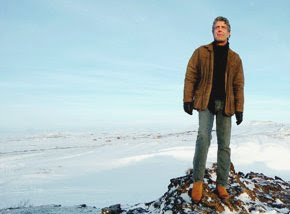 (right) was another episode that didn't pan out as Tony envisioned. In Iceland's defense, it's a beautiful place for a country picnic in the summer but not in January!
See also:
A restaurant Tony highly recommends:
The French Laundry, Yountville CA 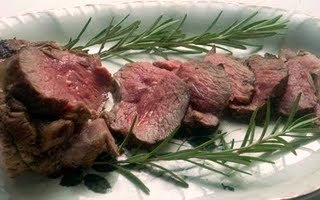 Brits transplanted to the U.S. pining for the delicate English or Welsh lamb, pine no more! Even Americans who've never been abroad can find out for themselves why Brits talk about lamb with a certain reverence. Soaking tough, gamey American lamb in a brine solution transforms it into a sweet, succulent facsimile of the young, tender lamb Brits remember so well.

Let the lamb sit for at least 30 minutes or up to 4 hours in the refrigerator for the best results. Go to SheKnows for Lamb Brine Marinade recipe and detailed instructions.

While we're on the subject of Brit disdain for certain foodstuffs in the U.S., there's a scene in the Joan Hickson version of At Bertram's Hotel in which Jane Marple and her friend Selena Hazy are poo-pooing American muffins during afternoon tea in the hotel lobby. The waiter appears and inquires if they'd care for seed cake, to which Miss Marple replies, "Real seed cake?".

So what is "real" seed cake? Seed cake goes way back in British history but was very poular in Victorian times and would've been a staple in cookbooks of the time. See recipes at The Aesthete Cooks and Marie Rayner's blog The English Kitchen. Enjoy! 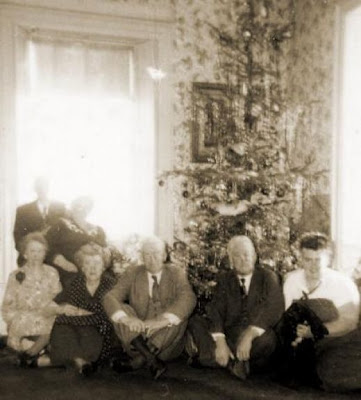 How many of us remember Christmases Past.

Fuzzy, out of focus. A blur of faces at Grandma's or
Uncle Frank's, none wearing name tags to identify
where they belonged on the family tree.

JamaGenie
Blessed with English, Scottish, Irish, German and Swedish ancestors infused with wanderlust and thinking outside the box, traits passed down to her. 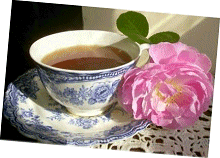 There'll Always Be An England